Looking for Your Next Adventure?

Financing available to those with approved credit. Pricing includes all rebates and incentives. Units are plus freight, handling, tax, tag, registration, and $299 processing fee.

Some songs are timeless classics. The same with motorcycles—especially when you’re talking about our Honda Trail125. It’s a modern riff on our classic Trail 90 and Trail 110 from decades ago. Except now it has a fuel-injected 125cc engine, disc brakes and a four-speed gearbox. Like the originals, it still features our world-famous no-clutch semi-automatic transmission, a frame with a low step-over height, and an integral luggage rack. There’s even front-wheel ABS and an electric starter! Best of all, it’s as much fun to ride as the originals too—maybe even more. So what are you waiting for? With a Honda Trail125, the world is yours to ride.

Nobody can match Honda’s reputation for engines, and even though the Trail125 ABS is relatively compact, it’s a giant in terms of performance and reliability. Air cooling keeps it super simple, too.

Because the Trail125 ABS is compact, it’s easy to park in the city, to load and unload from a motorhome, and to store when you’re not riding. There’s always room for a Trail125!!

Dirt bikes keep their intake and exhaust up high for better clearance and to keep them further from dirt and water. That’s what we’ve done with the Trail125 ABS too. The exhaust also features a heat shield, and makes a big contribution to this awesome little bike’s overall style.

We changed up the Trail125 ABS’s final-drive gearing compared to the Super Cub’s. Adding three teeth to the rear sprocket gives it better hill-climbing ability on trails and dirt roads—the kind of places you’ll want to explore.

The Trail125 ABS features a four-speed semi-automatic transmission you shift with your left foot, like a traditional motorcycle. But here’s the unique part: there’s no clutch to worry about. Plus, the Trail125’s heel-toe shifter makes operation even easier, especially in boots.

Old-school light bulbs? Forget about them. The Trail125 ABS features a full LED lighting package that’s lighter, brighter, and longer lasting. The headlight has a traditional round shape, while the indicators are squared off for a rugged look.

Turn the key, push a button, and you’re on the road—or the trail. But because adventure sometimes throws us an unexpected curve, we’ve also given the Trail125 ABS a kickstart lever, just like the original Trail 90 and Trail 110 had.

READY FOR ON- AND OFF-ROAD ADVENTURES

The best part of the Trail125 is that it lets you ride so many places. On the street it’s a fun, practical commuter. And its light weight, skid plate, spark arrestor and ground clearance make it a joy in the dirt. Plus, since it has a license plate, you can ride it in areas restricted to some off-road-only bikes, like state and national parks.

The Trail125 ABS is built for adventure. That’s why we gave it a special, reinforced steel backbone chassis. The design makes getting on and off easier, while providing great ground clearance and a rugged, ready-for-anything look.

With a 31.5-inch seat height and a taller handlebar, the Trail125 ABS has a nice, roomy cockpit that makes it comfortable in just about every riding situation, from urban commutes to dirt roads.

When it comes to instruments, the Trail125 ABS is fully equipped. The digital display features a speedometer, odometer, A&B trip meters, fuel gauge, clock, and indicator for low/high beam.

The Trail125 ABS’s round headlight looks retro, but its LED performance is totally up to date and provides superior illumination and visibility.

With its 1.4-gallon fuel tank (larger than the Super Cub’s) and awesome fuel efficiency, the Trail125 ABS offers a spectacular range. The tank filler is under the seat so it’s easy to access.

Who knows where your adventures are going to take you? That’s why we gave the Trail125 ABS a sturdy skid plate and a pair of front brush-guard tubes, along with 6.5 inches of ground clearance.

Need to pack along some camping equipment, or gear to survive the zombie apocalypse? Check out the Trail125 ABS’s large, flat rear cargo rack. Add our accessory cargo box and you’ll be ready for anything!

Riding in cold weather? Check out the optional heated grips. An available rear cargo box is another favorite. And what about adding a 12-volt electrical port too—it’ll keep your devices charged while you’re on the go, or even let you run a GPS.

Our front-wheel Anti-Lock Braking System can be a big help in making controlled stops in less-than-ideal conditions, like on wet pavement or other compromised surfaces. It’s a great feature whether you’re using your new Trail125 as a commuter or just riding it for fun, since it helps you stop with added confidence.

Real dirt bikes use spoked wheels, and so does the new Trail125 ABS. They’re big enough to roll along smoothly even in rugged terrain, and they’re strong enough to handle riding on dirt roads (or gnarly city streets).

We gave the new Trail125 ABS more suspension travel, for a smoother off-pavement ride. The telescopic fork is also protected by rubber accordion boots to keep dust out—and give it a cool retro look.

The Trail125 ABS’s blackout twin rear shocks and coil springs not only look proper, but they also do a great job of smoothing out the road and trail. Preload adjustment is intuitive and easy.

On a bike as rugged as the Trail125 ABS, a centerstand just makes sense. It gives you more parking options than just a sidestand, especially if you’re carrying cargo on the rack. It also makes servicing your own bike easier. 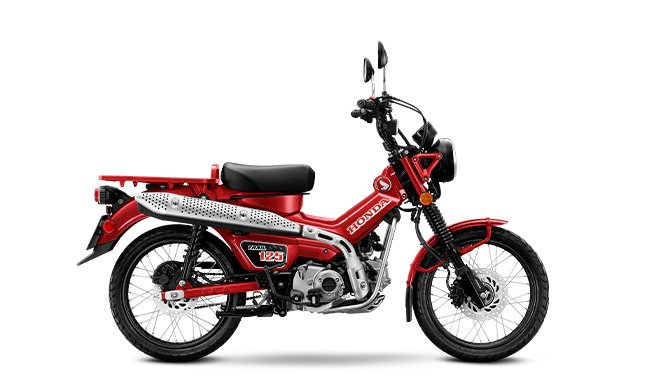 get a quote
Message Received - Thank You

Can't find what you're looking for? Let us know what you are trying to find and we'll help you out!